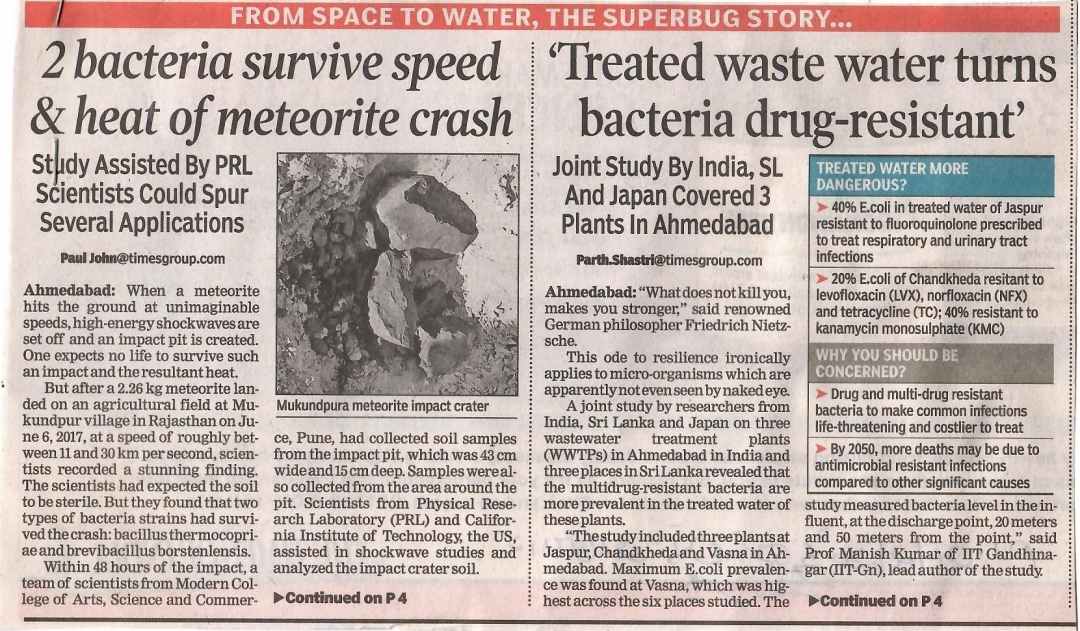 AHMEDABAD: “What does not kill you, makes you stronger,” said renowned German philosopher Friedrich Nietzsche.

This ode to resilience ironically applies to micro-organisms which are apparently not even seen by naked eye.

A joint study by researchers from India, Sri Lanka and Japan on three wastewater treatment plants (WWTPs) in Ahmedabad in India and three places in Sri Lanka revealed that the multidrug-resistant bacteria are more prevalent in the treated water of these plants.

“The study included three plants at Jaspur, Chandkheda and Vasna in Ahmedabad. Maximum E.coli prevalence was found at Vasna, which was highest across the six places studied. The study measured bacteria level in the influent, at the discharge point, 20 meters and 50 meters from the point,” said Prof Manish Kumar of IIT Gandhinagar (IIT-Gn), lead author of the study.

It is a cause of worry because treated water from Jaspur and Chandkheda is used for irrigation in 769 hectares collectively, as recorded in 2018. The Vasna plant’s water is released into Sabarmati River.

Titled ‘Treatment enhances the prevalence of antibiotic-resistant bacteria and antibiotic resistance genes in the wastewater of Sri Lanka and India’, the study was published recently in ‘Environmental Research’ by Elsevier. Other authors include Bhagwana Ram from IIT Gandhinagar (IIT-Gn), Himaya Sewwandi and Tushara Chaminda from University of Ruhuna in Sri Lanka, Sulfikar and Ryo Honda from Kanazawa University, Japan.

Prof Kumar added that while the treatment – done by activated sludge process (ASP) – reduces the overall prevalence of faecal bacteria significantly, the bacteria that survives the process are majorly of drug-resistant ability.

‘E.coli prevalence was reduced during treatment, but seemingly the remaining bacteria could adapt in the presence of antibiotics that lead to a further increase in resistance… As far as the gravity of the situation is concerned, the resistance to Fluoroquinolone is worse and thus Sri Lankan condition seems better than India’ mentioned the study.

The study also mentioned that E. coli strains of all the locations in both countries exhibited multidrug resistance implying a serious health concern in the near future. Strains showed a varying level of resistance for quinolone and non-quinolone groups of the antibiotics.