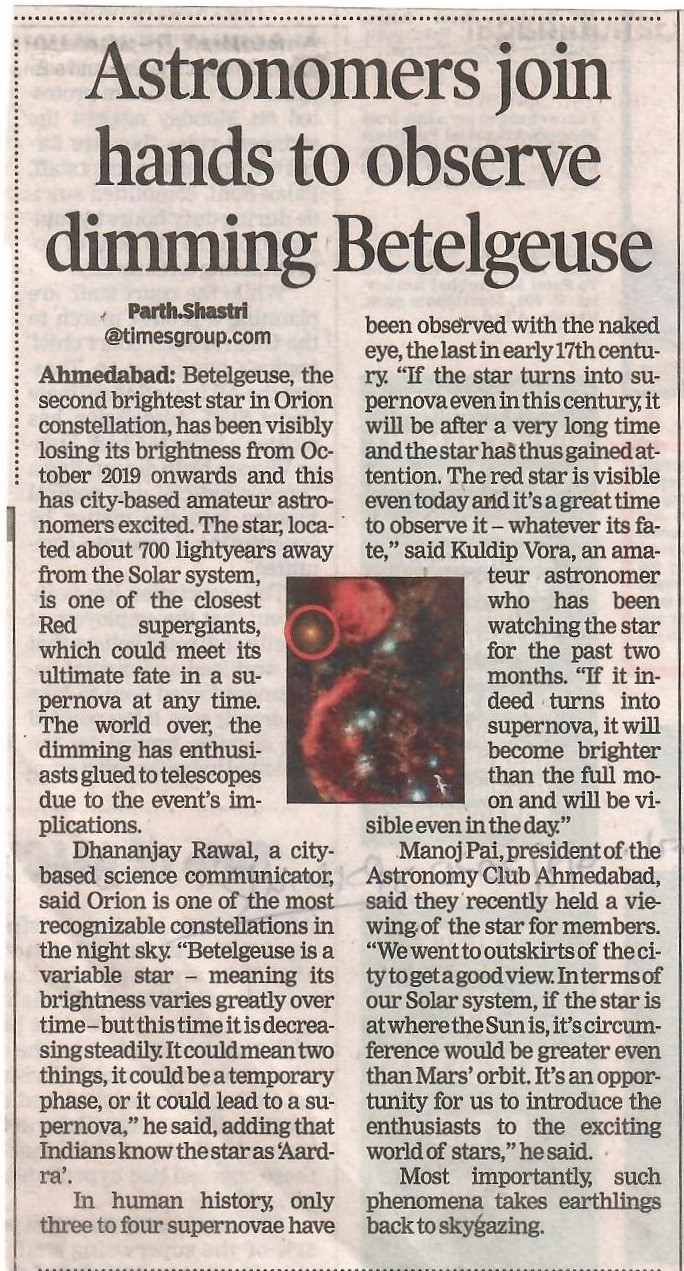 Ahmedabad: Betelgeuse, the second brightest star in Orion constellation, has been visibly losing its brightness from October 2019 onwards and this has city-based amateur astronomers excited. The star, located about 700 lightyears away from the Solar system, is one of the closest Red supergiants, which could meet its ultimate fate in a supernova at any time. The world over, the dimming has enthusiasts glued to telescopes due to the event’s implications.

Dhananjay Rawal, a city-based science communicator, said Orion is one of the most recognizable constellations in the night sky. “Betelgeuse is a variable star – meaning its brightness varies greatly over time – but this time it is decreasing steadily. It could mean two things, it could be a temporary phase, or it could lead to a supernova,” he said, adding that Indians know the star as ‘Aardra’.

In human history, only three to four supernovae have been observed with the naked eye, the last in early 17th century. “If the star turns into supernova even in this century, it will be after a very long time and the star has thus gained attention. The red star is visible even today and it’s a great time to observe it – whatever its fate,” said Kuldip Vora, an amateur astronomer who has been watching the star for the past two months. “If it indeed turns into supernova, it will become brighter than the full moon and will be visible even in the day.”

Manoj Pai, president of the Astronomy Club Ahmedabad, said they recently held a viewing of the star for members. “We went to outskirts of the city to get a good view. In terms of our Solar system, if the star is at where the Sun is, it’s circumference would be greater even than Mars’ orbit. It’s an opportunity for us to introduce the enthusiasts to the exciting world of stars,” he said.

Most importantly, such phenomena takes earthlings back to skygazing.