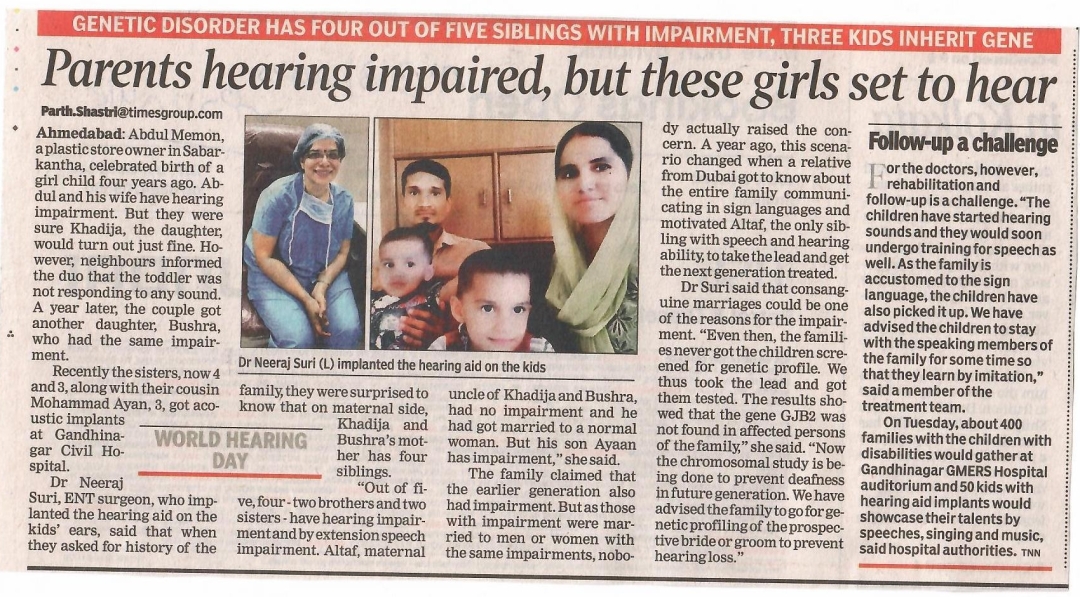 Parents hearing impaired, but these girls set to hear

Ahmedabad: Abdul Memon, a plastic store owner in Sabarkantha, celebrated birth of a girl child four years ago. Abdul and his wife have hearing impairment. But they were sure Khadija, the daughter, would turn out just fine. However, neighbours informed the duo that the toddler was not responding to any sound. A year later, the couple got another daughter, Bushra, who had the same impairment.
Recently the sisters, now 4 and 3, along with their cousin Mohammad Ayan, 3, got acoustic implants at Gandhinagar Civil Hospital.
Dr Neeraj Suri, ENT surgeon, who implanted the hearing aid on the kids’ ears, said that when they asked for history of the family, they were surprised to know that on maternal side, Khadija and Bushra’s mother has four siblings.

“Out of five, four – two brothers and two sisters – have hearing impairment and by extension speech impairment. Altaf, maternal uncle of Khadija and Bushra, had no impairment and he had got married to a normal woman. But his son Ayaan has impairment,” she said.

The family claimed that the earlier generation also had impairment. But as those with impairment were married to men or women with the same impairments, nobody actually raised the concern. A year ago, this scenario changed when a relative from Dubai got to know about the entire family communicating in sign languages and motivated Altaf, the only sibling with speech and hearing ability, to take the lead and get the next generation treated.

Dr Suri said that consanguine marriages could be one of the reasons for the impairment. “Even then, the families never got the children screened for genetic profile. We thus took the lead and got them tested. The results showed that the gene GJB2 was not found in affected persons of the family,” she said. “Now the chromosomal study is being done to prevent deafness in future generation. We have advised the family to go for genetic profiling of the prospective bride or groom to prevent hearing loss.”

For the doctors, however, rehabilitation and follow-up is a challenge. “The children have started hearing sounds and they would soon undergo training for speech as well. As the family is accustomed to the sign language, the children have also picked it up. We have advised the children to stay with the speaking members of the family for some time so that they learn by imitation,” said a member of the treatment team.

On Tuesday, about 400 families with the children with disabilities would gather at Gandhinagar GMERS Hospital auditorium and 50 kids with hearing aid implants would showcase their talents by speeches, singing and music, said hospital authorities.