AHMEDABAD: Of the estimated one crore ancient manuscripts in the country, nearly 20 lakh are with various institutions and individual collections in Gujarat. This treasure trove of ancient wisdom contains information on a variety of subjects, ranging from religion to astronomy and medicine to engineering. But who wrote these manuscripts of Gujarat and how were they maintained over the centuries?

An exhibition organized by BJ Institute of Learning and Research tries to answer these questions. Right from selection of writing material to preserving it in specially made pouches, experts have put together original tools and manuscripts for the exhibition. The oldest one dates back to 1486 AD while the latest is from the late 19th century. The exhibition begins on September 9 and will be open for a fortnight.

Prof Ramji Savaliya, director of the institute, told TOI that in ancient India, learning was passed on through oral traditions as it was considered sacred. Hence, writing of manuscripts was restricted to a particular class.

“Manuscripts were initially written on palm leaves. Over time, other writing material such as wooden plates, tree skin, animal skin, cloth and eventually paper came to be used. The simple text was eventually decorated with calligraphy, geometric shapes and later pictures of the highest quality. We have tried to show this evolution and how knowledge played a complex role in ancient India,” said Savaliya.

Some of the texts that will be put on exhibition include Kalpasutra, Geeta Govinda, Hasta Jyotish, Durga Saptashati, Quissa-i-Kamrup, Krishnashray Stotram, Shalibhadra Raas and Srimad Bhagavad Gita among others.

Savaliya further said that the exhibition coincides with course on manuscripts introduced by the institute recently. “The state has long been a hub of manuscripts collected over centuries. Even today many households have precious texts but few know their real value. Hence, we wanted to create awareness about this fascinating subject, particularly among people who have no background in it,” he said.

The institute houses 14,000 manuscripts which were catalogued two decades back. Savaliya said that apart from Indology, study of languages, mythology and religious texts bring researchers to the state for information on ancient architecture, astronomy, biology, medicine, dance and drama, mathematics and metallurgy.

Believe it or not, the yellow metal continues to be in high demand even today for writing. Many Jain and Hindu scriptures are written even now in gold ink. Some organizations and institutions have kept the tradition of using gold ink alive. Institute officials refused to reveal how gold ink is made but they did say that it is always written on blue surface because of the contrast between blue and yellow. This helps expert lahiyas (writers) with proven prowess in calligraphy write with total precision. The honour of being written in gold is reserved only for the most revered religious texts, said a Jain monk who supervises such writing.

Talking about the first batch of the course offered by the institute, Prof Savaliya said students and professionals from a variety of disciplines had shown interest. “We have an interesting mix of learners. We intend to take their help in translation of many texts,” he said.

Kumarpal Desai, managing trustee of the Institute of Jainology and a noted author himself, said the younger generation should know what our ancestors bequeathed to us. “Preserving ancient texts is a difficult task which, till now, was being done by very few people. Now we are optimistic that the texts will be alive through translations and digitization,” Desai said.

Rajul Shah, a student of the course, said he had studied language for many years. “I am a graphologist and help people on the basis of their handwriting. When we look at manuscripts, it amazes me how much effort has been put in to capture the spirit of that era through tales and sermons,” said Shah.

The 18th century manuscript of Quissa-i-Kamrup, written by Hari Ram in Persian script, narrates the love story of Lata Kam and Kamrup. The narrative is laced with stories of various gods and goddesses and is illustrated by intricate paintings. In a page depicting Lord Ganesha and Saraswati, Ganesha is depicted as a god whose name alone brings good luck. The lord of Gana (Ganapati) is also known as Vinayak, Brahmanaspati and Vidhneshwar in ancient texts. A school of thought believes that the current form of Lord Ganesha as the Elephant God came from the figure of ‘Om’ as written in Indian scripts.

The late 18th century manuscript of the Durga Saptashati depicts various forms of the Divine Mother and her manifestations. It is so named because of its 700 shlokas that are taken from Markandeya Purana. In colloquial parlance, it is also known as ‘Chandipaath’. The couplets depict three major events – the killing of Madhu-Kaitabh demons, the slaying of Mahishasura and the destruction of the army of demons including Raktabeej, Chand-Mund, Shumbh and Nishumbh. It also weaves in a number of other tales describing various worlds and how gods worshipped the Divine Mother.

The 19th century (1887) manuscript, Kalpasutra, includes a chapter on pajjosamana or paryusasamana meaning forgiveness. This is also the name given to the eight days of austerity observed in Bhadrapada. Kalpasutra is a treatise concerned with the forgiving conduct to be followed by believers during the season of rains. Recitations of the Kalpasutra are held during this period. It has 1250 shlokas divided into 291 sutras or paragraphs. It has three distinct sections – Jaina Charita, Shaviravali and Sadhu Samacari. Each section focuses on the life of the Tirthankara, genealogy of prominent teachers and rules of conduct and propriety respectively.

The institute has preserved a fraction of an old roll considered to be part of the 19th century teachings in Vedic Vaastu Shastra. It depicts various forms and rules of construction and when and where to apply them. According to experts, the scriptures mention 22 types of various structures prevalent in the Vedic period. The first proper description of homes is found in the hymns of Yajurva Veda where homes were constructed with four upmit (pillars), adjoining pratimit (columns) covered with parimit (mud tiles or bamboo). 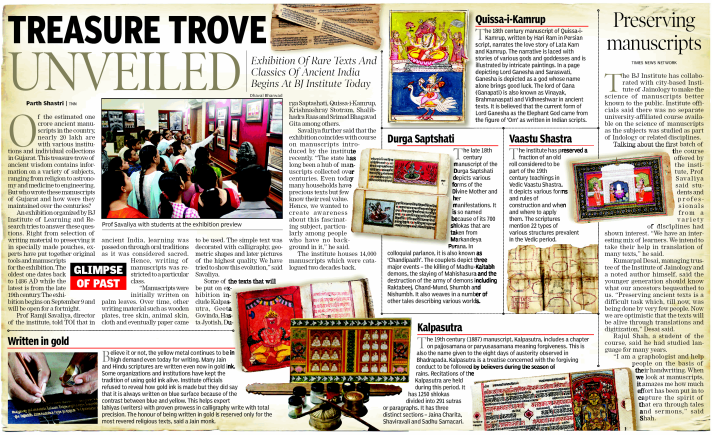