AHMEDABAD: Samina (name changed) was found crying at the railway station by the railway police on Friday. Dressed in traditional Kutchi attire, the 16-year-old stood out in the crowd thronging the station. The girl later told the police that she had left home to escape her rapist father who had preyed on her many times in the past months. The girl has alleged that a tea vendor in Ahmedabad took advantage of her and raped her.

On Friday, Samina sat fidgeting, refusing to establish eye contact as her custody was taken by Childline, an NGO working for child rights with a network across India for lost and found children. Samina becomes bitter when asked about her family – she says, “Maro baap harami che” (roughly translated: my father is evil). Samina says she escaped from the horror at home by boarding the Saurashtra Express to Ahmedabad, where the youth allegedly raped her on the pretext of helping her.

“I am the third of four siblings and live with my parents at a village on the border of Jamnagar and Kutch districts,” Samina says. “My father is an auto driver. The nightmare started four months back. I was sleeping when my father came and lay next to me and started molesting me. He threatened me and asked me not to talk to anyone.” Over a period she was raped repeatedly, Samina says. “He used to tie me up and even stick tapes on my mouth,” she says. “Earlier this month, I mustered the courage to tell my mother. She was stunned. However, she chose to take my father’s side and even abused me saying that I should be ashamed to speak such evil of my father.”

Her mother’s mistrust pushed Samina to break free. Over a period of a few days, she collected some money and decided to go to Malegaon where one of her close relatives resides. Two days back, she got down the train at the Kalupur railway station. It was for the first time that Samina was travelling alone. She never went to school and cannot read or write.

“I approached a youth near a tea kiosk to guide me about which train to board to Malegaon. He was very compassionate,” Samina says. “He asked me not to go to police as there was heightened security. He asked me to accompany him for food and accommodation. I was apprehensive but I did not know anybody in the city and thus I went with him. He took me in auto to a spot that I don’t remember and raped me. He then dropped me at the railway station.”

Purnima Gupta, the assistant director of Childline, told TOI that it was disheartening to come across such cases where children are not safe even with their parents. “We have counseled the girl and have approached our counterparts in Jamnagar to verify the girl’s story and have the father booked if he is found guilty,” Gupta said. “The girl will be taken for a medical checkup.”

P P Pirojiya, inspector of Government Railway Police, said: “Our team has recorded the statement of the girl. We are yet to get information about her sexual abuse in Ahmedabad.” 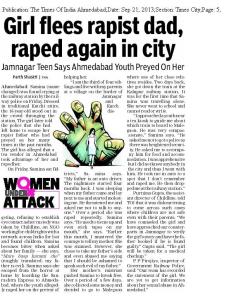